Hello, My name Is Enrique Escajeda and I was born with Bladder Exstrophy. For those that don’t know 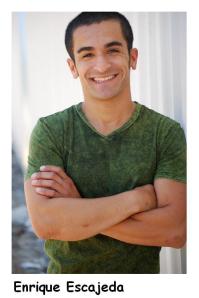 bladder exstrophy is when a person is born with their bladder on the outside of the body.  It’s a complicated ailment that demands many surgeries especially throughout childhood. The reason for my post hear would be that despite all that I happen to be a very physically active individual holding over 5 jobs in physical performance. Some wonder, how does one such as myself, enter a world such as this with a bed ridden history that’s so extensive?  I suppose the only answer I have for that is my view on choices and control. i owe much of my perspective to my mother due to the fact that if it wasn’t for her I’m sure I wouldn’t be doing the things I am today or even thinking the way I do.  So here is my story in how my mom raised me followed with the dark adolescent period and then how her old tactics brought me to where I am today.

When I was a child she noticed that whenever I was in the hospital (which was a lot) doctors and nurses would never ask me if they could take my blood or remove my stitches or bandages. They would all tell me what they were going to do and when they would do it.  Nothing was ever my choice and I didn’t have any control with what they did to my body. It was then that she began to give me small choices. Whenever she saw an opportunity my mother would ask me to make little decisions with 2 choices.  Most often it was about where I wanted to eat. Did I want McDonald’s or Carl’s Jr.?  It was small but gave me a sense of what was within my control. Later this became a fun little game for me. Whenever my mom would ask me to do something I would respond with “do I have a choice?” If it was about cleaning my room though the answer was usually NO.

After spending more years in the hospital I began to form relationships with the staff and develop certain preferences. I

knew I would have no choice in getting an I.V. in my arm but I could choose where I wanted the I.V. to be. I have always preferred it to be in my forearm for maximum mobility of drawing and eating. These were things doctors didn’t usually mind accommodating. looking for moment when I could have a say or choice that was my own was something that turned out to be more important than I ever would have realized.

Like anyone else I still had really bad days and some dark times. It could be really frustrating having to deal with surgeries, pain, and having to have tutors all the time to catch up in school. Plus being that I was never open about my condition I would also have to try and think about what I would tell people after being absent for so long. Over time I began to ask “why me?” Being so frustrated with what I didn’t have or couldn’t do made it difficult to see any choice. I hid behind a happy exterior and did theater throughout high school as a form of escape. All the while my darkened thoughts began to evolve from “why me” to “what’s the point of my existence?” This wasn’t a happy curiosity of existence as it was seeing myself as useless because I was incapable of simple human reproduction. I figured if I couldn’t do that then what’s the point of getting involved in romantic relationships. If there was no point in forming relationships then what was the point of even living. This one thought was a plague in my brain throughout my late high school early college years.

I can’t tell you when it all changed or why but I do know that at one point I had a conversation with my mother where she reminded me of the choice game when I was younger. And I remembered the happy times of my younger days both in and out of the hospital. Those memories that seemed to be buried in the loud chaos of angry thoughts all came to the surface. It was at this turning point where I began to try things I wasn’t good at. I began to make new choices and try new things because the act of trying something new was just such a perfect distraction.

One of the first things I chose to do was take aerial classes at a school known as “Hollywood Aerial Arts” in Inglewood California. I always loved climbing and I thought I would give this a shot since it was something I had never done before. There I was a 21 year old guy having no formal physical training, taking aerial circus classes. I recall I couldn’t even hunch over and touch my toes at the time. I chose to stay with it though. Not sure why exactly, I guess something in me just made it too important to quit. I later began a gymnastic course at school and after a while landed a job at Knott’s Berry Farm on the stunt team.

I have since been enjoying the excitement and surprises life brings me everyday just doing what’s fun. I do not believe

any of this would have been possible through negatively questioning my existence or wondering why I’m different. I can’t help but feel extremely grateful to my mother for her life lesson in choices.  Without that understanding I’m not sure what would be going through my head today. The power of choice I believe to be one that many take for granted and something everyone needs to be more aware of. I try to pass it on as much as I can in hope that those who think like I once did can change their way of thinking and begin to truly live a happy life. For those of you that think in such a way I leave you with this quote:

“We were born to make manifest the glory of God that is within us….And as we let our own light shine, we unconsciously give other people permission to do the same”               – Marianne Williams

It is with this quote that tells us by leading a happy life of your own definition then you are unconsciously inspiring others to do the same.  Make inspiration contagious and choose to live life, your way that is within your means. Who knows you may find that you will go beyond what you think your limits truly are.

If you would like to contact Enrique Escajeda you can do so by e-mail us at contact@courage-to-shine.org with Enrique Escajeda in the subject line, and we will forward him all e-mails we receive.

Please read Courage-to-Shine.org disclaimer & please do not try any of the stunts Enrique Ecajada performs without proper professional supervision.